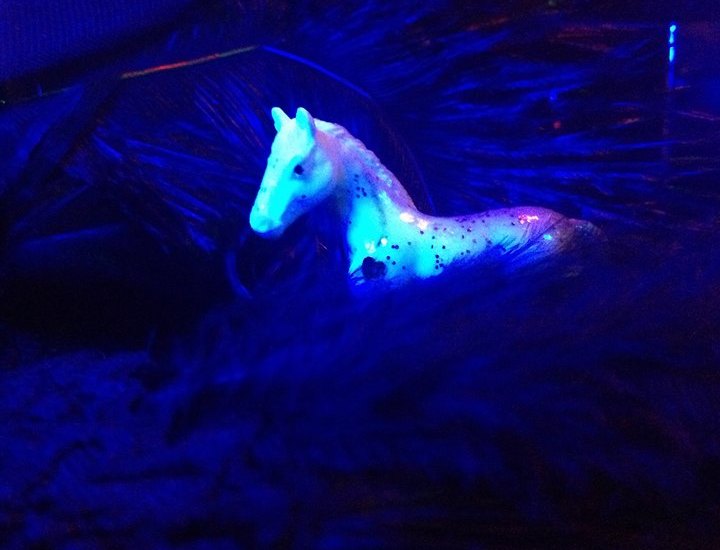 Dr Magnus Gestsson requested a piece from me for his portable Gallerí Gestur / Gallery Guest. It was to be shown in England and Iceland.

The piece is composed of a “stage”, a “hero”, two mini torches, a set of burst birthday balloons to be used as colour filters and an instruction sheet.

The connection to the scene gets personal with the appearance of the “hero”: the white horse. I feel this horse stands strong and pure in the darkness. The horse is a symbol of creative force according to Carl Jung, and this horse is just that.

The phrase “Colossal Calm” comes from my reading a Janis Joplin biography which included a description of heroin taking as a feeling of intense peacefulness and satisfaction (according to Janis, obviously…). The other side of heroin didn’t seem all that fascinating and the reading of this book made me feel sad most of all…

I thought that I would create a scene which would induce a sentiment of deep calm in the viewer; a universally sought feeling satisfied by the power of imagination rather than superficial highs.

The audience takes a leading role; in control of the lighting, in search of the optimal angle, the ideal positioning of the hero. The scene they create is personal to every viewer, each person a unique stage director for a unique moment.