Mary is a film improvisation by John P. Buck with an original composition by Garry Greenaway.
I play the part of the saint and the sinner lady.

I made barbie headpieces for another project initially, it turned out to become central to Mary providing the initial impulse for the creation of this piece. My relationship with Barbie is tumultuous; as a child I was not allowed Barbies and I only played with them at my friends’ house. What they represent has evolved considerably since I was a child; today, Barbie is more often than not taken as an example of how the deep rooted sexism of our society expresses itself in pop culture, perverting the young minds…

Here, the Barbies are sheer bodies attached S&M style to each other with bare metal wire and delicate bridal flowers and beads. 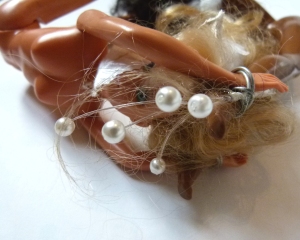 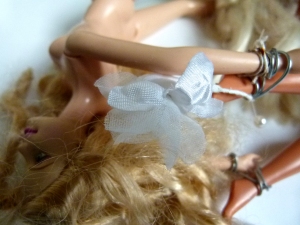 One thought on “Mary”